(Is it blind frenzy that hurries you along, or some stronger force, or is it guilt? Answer my question!)

A strange phenomenon has emerged in the ancient Roman colony of the jews. The Israeli populace spread out across the ancient territory of their – or some of their – ancestors are being bombarded by thousands of rockets so ineffective that, despite the psychological strain, kill only a handful, while the whole might of the state is bombing the huddled masses of arabs packed together on the tiny Gaza strip. Daily houses are destroyed there by bomb and drone, women and children are torn to shreds with their men – almost two thousand dead. The Israelis on their side are disturbingly untouched by this massacre. Educated, middle class matrons on television express approval of this lethal bombardment, bizarrely unmoved by sobbing mothers and mutilated infants.

The media directed view of the disaster posits two quite rationally unacceptable positions – the Israelis under rocket attack versus the bloodbath of neighbours controlled by a military group claiming their “just rights”.
How did we get to this unconfronted human disaster?

Let us begin at the trigger point in the 20th century.
The Second World War was technically begun in response to the German invasion of Poland. Its successful conclusion would logically have been accomplished on the salvation of Poland as a sovereign state. As we all know, on the cessation of the conflict, an unconditional surrender, Poland was handed over from one foreign enslavement to another. In terms of realpolitik the war became an American invasion of Europe, and represented a Roman-style liberating annexation of Western Europe with an American financial hegemony. Italy was a broken fascist state, France a degraded state emerging from occupation and persecution, Britain a bankrupt and exhausted ruin. American arms had flattened and firebombed Hamburg, the Ruhr cities, Dresden and Berlin.
Pax Americana established three new institutions to herald the post-war evaluation. One, the foundation in New York of a United Nations Organisation with a built-in non-democratic veto assuring control. Two, the Bretton Woods Agreement outlining a new dollar controlled world economy. Three, the foundation of the state of Israel.

The dynamic of the new state was two-fold. One, the emotional appeal of granting a homeland to the former victims of a horrific persecution. Two, the fulfilling of the old Europe’s dream of a national home in Palestine, named Zionism.
Despite the elevated and religious basis of the Zionist concept it has to be put on record that the foundation of a state dependent in the majority on former members of concentration camps was unlikely to produce a democratic free society.
The psychology of the concentration camp is that the inmates are unified against an absolutist and sadistic enemy of guards and murderers. Survival not freedom is its only civic character. As a result the Israelis looked on those around them as a life-threatening menace. The state has been a coalition state from its inception – that means, a one-party state. The only civic organisation essential to the new state has been the operation of the most brilliant and feared secret-service in the world – Mossad.
To understand Israel today it must be recognised that its citizens suffer from post-concentration-camp-psychosis disorder. This is why the anti-war Israelis are all very young. Ibn Khaldun says it takes three generations to renew a social ethos.
The apparent ease with which educated middle-aged men and women daily on television not only approve but call for the massacre of women and children next-door in Gaza is simply not explainable rationally. It is part of this psychosis.
A further element of this condition is the Israeli inability to deal with matters by military practice. Bombing and droning are acts of cowardice. The Israelis cannot role-play militarism. Gaza is attacking? Then invade and occupy. It could have been done in an afternoon.
The removal of Hamas will change nothing. There still remains a nation divided by its two contrary elements described above. Eventually the Israelis must meet all their Arab neighbours and socialise! Israel is not a ghetto – it is a disused concentration camp.

As for Hamas – whereas Israel has a future, Palestine has none. Conquest is a reality. Defeat is not disgrace. Look how the great nations of Japan and Germany rose from absolute defeat to dominate the modern world.
Hamas is not an Islamic event. Its leaders swore unity and peace with King Abdallah at the Ka’aba and broke their word within the week. Their military personnel are the bombed and mutilated women and children of Gaza, their weapons are not the useless Iranian rockets but rather the ruined houses of their own people. Years ago they abandoned the Deen and crossed over to the Shi’a-Syrian-Iranian forces today devastating Syria and Lebanon. What do they promise their people? Rescue from the World Bank and the IMF – was it for that the thousands have been destroyed?
Israel must fulfill its force in the region, occupy, and govern with civic responsibility. It must learn to be a state and that means allies next door, not being owned by the now collapsing American hegemony. 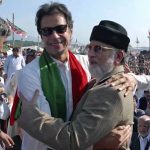